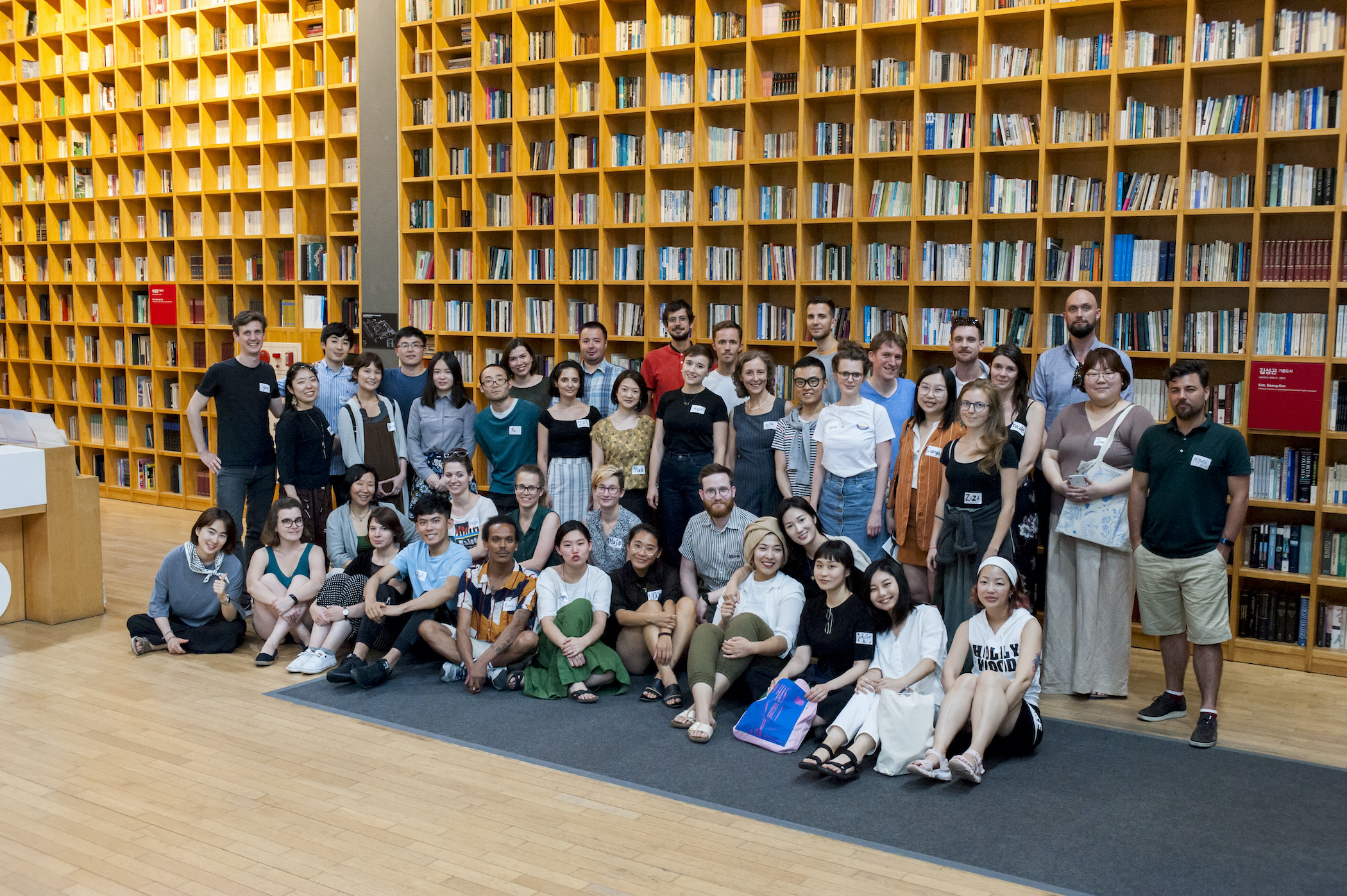 From 26 June to 7 July 2019, the Korea Verband organized the exchange program EPRIE 2019 in Japan and South Korea. Under the theme “Overcoming the challenges posed by social media: How to make it work for social change” the participants explored the question how social media can be used for social change. A total of twenty young people between 25 and 38 years old took part in the program, ten of whom came from Europe (Germany, Poland, France, Georgia) and ten from Asia (China, Japan, Korea, India and Australia).

The program kicked off with a pre-seminar at the National Olympics Memorial Youth Center in Tokyo including diversity training, personal introductions, and various methods enabling participants to get to know each other in their diverse roles beyond their nationalities and backgrounds. In this way, the participants were able to become aware of their own privileges in their respective societies and meet on an eye-level.

In small groups the participants worked on definitions and discussed the role of social media in preparation for the seminar. The first speaker, Sawa Yasuomi of Kyôdo News, who had already attended EPRIE 2018 in Germany, pointed out the specific behavior of Japanese users in social media and discussed the connection with the election results in Japan. The next day, Prof. Dr. Ulrike Klinger (Free University of Berlin) presented the results of her institute’s long-term research project “Role of social media in shaping public discourses”. We were lucky to have Prof. Kim Kyounghwa Yonnie as the next speaker, who teaches at the Kanda University of International Studies. She compared the recent development of peaceful demonstration in South Korea and Japan with the title “Demonstration as media: From Korean and Japanese cases”.

Alumni of the program 2017 arranged dinner at the restaurant Ruby. The owner fled from Myanmar to Japan and after years of struggle he received his residence status. Now he is committed to building a school in Myanmar. He spontaneously gave a speech about his life, which deeply impressed the participants.

During the program, it was important for us to balance the presentations of the invited speakers and the presentations of the participants themselves. The participants presented their current works, dissertation projects or even film contributions that were produced as part of their campaign or as video documentation. In the afternoon we visited the Mori Art Museum with a special exhibition on “Fake News” by Taiwanese artists, which was enriching for the entire program.

The lecture by Shi Ming, a freelance journalist from Germany, on nationalism in East Asia and the role of social media provided an overview on China, South Korea and Japan. Christoph Deeg conducted a workshop on “Challenges and opportunities” via videos, in which the participants took the the role of politicians and dealt with various arguments on social media and politics.

As in the previous years, visits to NGOs were seen as a highlight of the EPRIE exchange program. In four groups the participants visited the Youth Support Center YSC Global School, Peace Boat, Voice Up Japan and Center For Minority and Mission (CMIM) to discuss the role and possibilities of social media for the work of NGOs. After the visits we all met at the der Japan Association for Refugees (JAR) and Terahata Fumie, who participated in EPRIE 2017, introduced us to the work of JAR.

In preparation for the meeting with the alumni in Korea, we watched the film “Crossroads” about the shipwreck of the Sewol ferry in order to understand the context for the recent history of the social movement in South Korea. The program in Tokyo was successfully concluded with another session of presentations by the participants.

The alumni conference for the twenty alumni already began on 3 July 2019 in Seoul, South Korea. They visited the People’s Solidarity for Participatory Democracy and learned more about the influence of social media and the transformation of the South Korean society. On July the 4, the alumni met the participants of EPRIE 2019 for the joint seminar in Paju near the inner-Korean border.

By visiting the Democracy and Human Rights Memorial of the Korea Democracy Foundation and the Odusan Observation Platform, participants and alumni were able to explore and share the division and history of South Korea. The latter was also the topic of the previously mentioned “Crossroad” documentary, which we discussed together with the director Neil George.

During an Open Space workshop organized by the alumni on “The Future(s) of EPRIE”, participants and alumni had the opportunity to contribute their own interests and ideas. This year, alumni from other exchange programs also participated to advise the alumni on how to realize their ideas. The Open Space ended with action plans for the implementation of joint project ideas. These included a festival in Berlin on migration experiences (#mygration) and a research project on comparing the media landscape and social media in East Asia.

Some projects developed into cross-regional and cross-year projects that are funded by the EPRIE Project Fund(EPF). The EPF was launched in spring 2018 together with the Robert Bosch Foundation to strengthen the networking of EPRIE alumni beyond the program. Results of this funding were presented in Paju by five project teams.

We would like to thank our cooperation partners, in particular the Robert Bosch Foundation, the Friedrich-Ebert-Foundation in Japan, and the Korea Democracy Foundation, for their support for the EPRIE exchange program 2019.

Title cover picture shows the participants from EPRIE 2019, together with the Alumni in Paju, South Korea; photo: Tsukasa Yajima